When Luke Rhodes was born in the summer of 2020, something set him apart from his three older sisters besides being Rachel and Nick Rhodes’ first boy.

He barely moved in Rachel’s womb during her pregnancy, and when he was born, he didn’t cry. The Chesapeake baby had a low heart rate and poor oxygen levels, so he was whisked away to the hospital nursery for closer evaluation.Within days, he was transferred to Children’s Hospital of The King’s Daughters neonatal intensive care unit, the highest level NICU in the region. Doctors needed to figure out what was causing his lethargy, and the floppy quality called “hypotonia,” which means “low muscle tone.”

Was it a heart defect? Intestinal problem? A neurological issue? Luke’s constellation of conditions was puzzling. After more than a month in the NICU, he went home on oxygen.

Hypotonia is linked to 600 different syndromes, so pediatric neurologist Sarah Chagnon ordered whole exome sequencing, which looks for changes, or typos, in the genes of an individual’s DNA.

In February, the Rhodes received the missing piece to the puzzle: Luke had Coffin-Siris Syndrome, a rare genetic disorder that causes varying degrees of learning and developmental conditions.

The doctor referred Luke to Dr. Samantha Vergano, a medical geneticist at CHKD, and told the Rhodes they were fortunate as she has a special interest in the condition.

It only took a Google search on Coffin-Siris Syndrome to discover just how deep that interest ran. When they clicked on studies involving the disorder, her name was usually on them.

“People seek her out from across the globe, and here we were, 10 minutes away,” Rachel said.

Dr. Vergano developed an interest in the syndrome, which was first described in 1970, during a fellowship in medical genetics at Children’s Hospital of Philadelphia. When she came to CHKD as a medical geneticist, she continued her research on the syndrome.

In 2015, she launched the first international registry of patients. Today, 333 children and adults from all over the world are in the registry. Genetic research during the past decade has led to identification of the genes associated with the syndrome, so a growing number of diagnoses are being made. Still, many people go undiagnosed.

Most have mild to moderate learning challenges and slower development of speech and motor skills. The tips of their fifth fingers and toes are often underdeveloped, which is why the condition is sometimes called “fifth digit syndrome.”

Some parents don’t care about getting a diagnosis, as it doesn’t come with a cure or specific treatment, like a medication. But for other parents, diagnosis brings closure, knowledge, and the ability to connect with others.

For Carissa and Shea Robinson of Seattle, getting a diagnosis helped them see that there was nothing they could have done to prevent the problems their son, Caleb, began having the day he was born: Difficulties feeding, respiratory infections, and a heart defect. 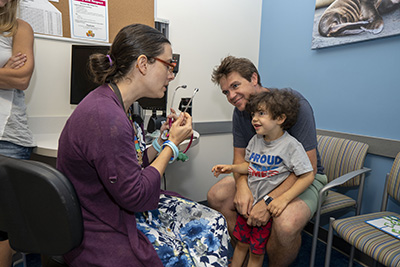 “Every doctor was baffled,” Carissa says. “It was like we had this mystery kid who was dying in front of us. We didn’t have any answers. He was unhappy, just wilting away.”

He was finally diagnosed in 2015, when he was 2, and his family was immediately able to connect with other families through a Facebook group.

“We dug deep into what research was out there on CSS. Dr. Vergano’s name popped up on almost every article we found. We emailed her asking, ‘Where do we go from here?’”

The next summer, they had a small gathering in Norfolk with Dr. Vergano and several other CSS families and later created the Coffin-Siris Syndrome Foundation, with Dr. Vergano serving as medical advisor. The foundation is having a virtual conference this year from April 30 through May 2.

For the Robinsons, a diagnosis brought them a network of connections and annual conferences. “It created an avenue to step in and own it,” Carissa says. “It took away the ambiguity.”

Caleb, who is now 8, has also been treated by Dr. Vergano at CHKD. “Who doesn’t want to see the lead researcher in your kid’s rare diagnosis?” Carissa said.

Dr. Vergano said it’s been gratifying to bring families together and to help them create the best plan of treatment for their child.

“I don’t have a magic wand where I know what will happen,” Dr. Vergano says. “I try not to put ceilings on what they can do, but instead help them reach their full potential.”

She works closely with patients, families, and other healthcare providers to gather data, advocate for patients and family members, and further research into the condition to improve the lives of all.