By age 26, Richard Cole had almost given up hope that anyone could fix his concave chest.

Richard, who lives in Smith Mountain Lake near Roanoke, was born with pectus excavatum, also called sunken chest syndrome. He had his first surgery to correct the condition at age 5, at a military hospital. During that procedure, surgeons removed cartilage in the area of the depression with the plan that it would regenerate and support his chest in the correct position. Unfortunately, the procedure failed, and his chest reverted to its original concave (sunken) profile.

When Richard was 14, surgeons near his home at the time in Northern Virginia assured him that they could do a better job than the first group had. But their optimism faded quickly in the operating room when they realized that the cartilage removed from Richard’s chest at age 5 had never regenerated. Without adequate scaffolding from ribs and cartilage to reshape the chest wall, they were unable to perform the planned procedure.

As his chest grew, but his cartilage did not, Richard’s situation became more dire. “You could see my heartbeat through my skin,” he says. “If I had been in a car accident, the steering column or even just an air bag would have caused enough blunt-force trauma to kill me instantly.”

So, at age 20, Richard tried again. This time he turned to a military surgeon with experience operating on soldiers who sustained traumatic chest wall injuries in Afghanistan. The surgeon implanted synthetic mesh between Richard’s heart and sternum with the expectation that it would foster bone and cartilage regeneration. Once again, the attempt failed. 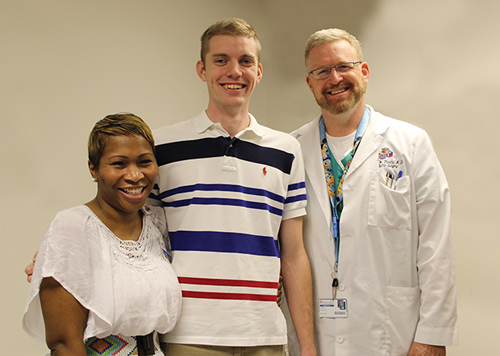 Then, at age 26, Richard learned of one more place that might offer him the hope of a more normal life: Children’s Hospital of The King’s Daughters. “My little brother’s pediatrician told me that CHKD did amazing things with chest wall repair.”

CHKD became an international pacesetter in pediatric chest wall repair when Dr. Donald Nuss created a minimally invasive surgical approach to correct pectus excavatum in the late 1980s. For 30 years, CHKD has been perfecting the Nuss Procedure and leading international research and innovation in the field of chest wall repair. Richard read about CHKD’s expertise with his condition and made an appointment with Dr. Frazier Frantz, one of CHKD’s pediatric surgeons.

After an initial consultation, Dr. Frantz was motivated to help the young man. “Richard was suffering. He essentially had a condition called flail chest in which broken or absent cartilage compromises normal breathing,” he says. “When a person with flail chest takes a breath in, the sternum is sucked inward and lung expansion is inhibited. Just the opposite of what happens with normal respiration. Breathing in this manner severely limits exercise capability and quality of life. The condition also caused Richard chronic pain, which further limited his activity.”

But absent adequate chest cartilage, Richard wasn’t a candidate for any of the procedures in CHKD’s extensive repertoire of chest reconstruction techniques, which are all based on the pliable nature of the chest wall. “Richard provided us with an opportunity to think outside the box,” says Dr. Frantz.

To help Richard, Dr. Frantz and the CHKD chest wall team envisioned something like the breastplate of a knight, which could be surgically affixed to Richard’s remaining ribs. “The goal was to restore stability and improve function,” he says. “The chest has to be strong enough to protect his internal organs and flexible enough to expand and contract.”

Dr. Frantz shared MRI images and CT scans of Richard’s chest with engineers at Biomet Microfixation, the manufacturer of the hardware used in the Nuss Procedure.

After months of planning, the engineers created four titanium plates that would be attached to Richard’s remaining sternum and ribs to create a strong but moveable chest wall.

In the groundbreaking surgery last April, Dr. Frantz began by fracturing Richard’s sternum to create a smooth surface for the titanium plates to rest upon. He then placed the four plates together like a puzzle that meets in the middle of Richard’s chest. Then Dr. Frantz attached the plates to the remaining ribs using more than 70 screws. After the new chest wall was in place, Dr. Franz stretched Richard’s pectoral muscles across the top surface of the plates and closed Richard’s incisions. 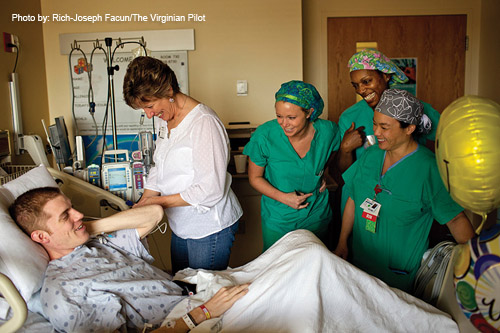 When Richard awoke after more than seven hours of surgery, he immediately felt a difference. “I could breathe for the first time in years … I couldn’t stop crying because I was so happy. I was euphoric,” he says. By that evening, with the help of his physical therapists, he was walking through CHKD’s hallways.

In the days that followed, Dr. Frantz was cautiously optimistic about Richard’s marked improvements in breathing ability. “We had never attempted a repair this extensive,” he says. “This is case No. 1, so we kept close tabs on Richard as he recovered, and we were very pleased with his progress.”

After a week at CHKD, Richard continued recovering at his home in western Virginia and returned to the hospital for a series of follow-up checkups. “Every time I see Richard, my smile gets a little bit bigger in appreciation for what we were able to do and how well Richard has adapted to his new chest wall,” says Dr. Frantz. “He has a different perspective on life. He can breathe much easier, and this has opened a window to a much brighter future for him.”

Richard agrees. This fall, he returned to college in Cincinnati to study theology and is encouraged about his future opportunities and his newfound health. He started running to rebuild his stamina and hopes to complete a 10-mile run next year. “Today I am feeling like a brand new person,” says Richard. “It is a very wonderful contrast to how life used to be.”